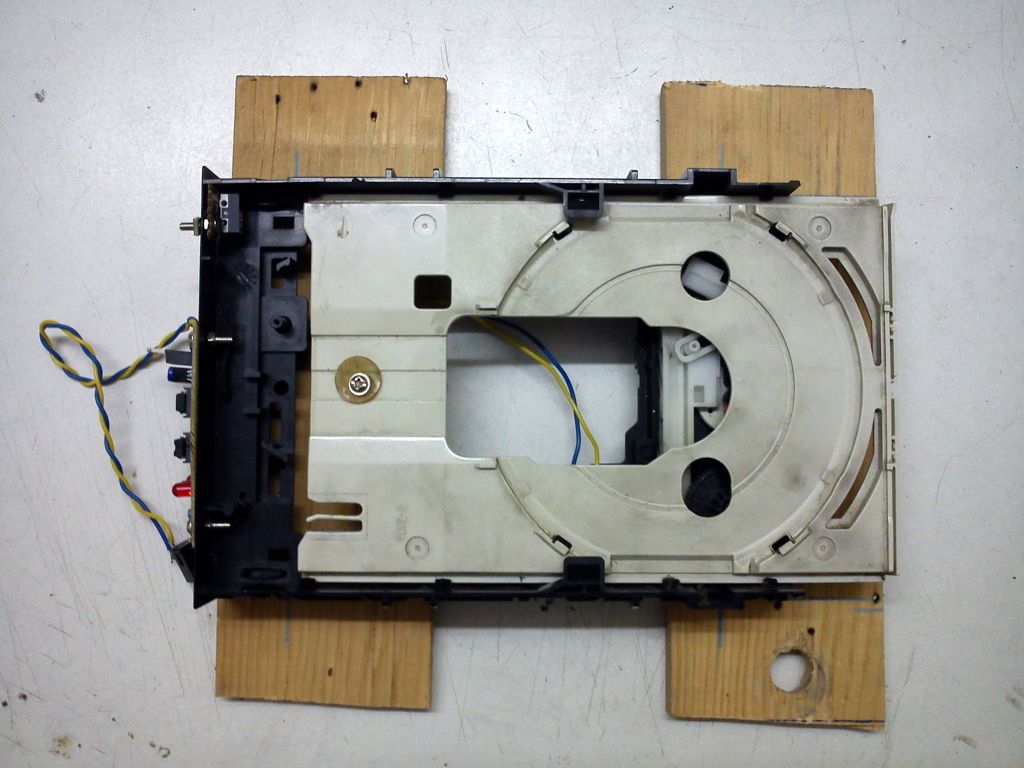 After a somewhat woeful week at college that shook my belief in several sectors.. I mustered up my courage to realize an old project they knocked the door every time i used to Etch PCB boards. Since, the solution i use has already done close to 20 boards of small size one has to really keep shaking/stirring/Agitating the solution for a fairy long time.. ( ya 7-8 mins of man power is fairly long time 😛 )

The idea came to me when i visited my brother in Bangalore earlier this year. He was generous enough to give us a tour of his world class Biotechnology lab in India.. He showed us stuff and things/instruments which were difficult to pronounce in one go but they all had a thing in common- They ended with syllables like –‘-izer’,-‘ator’,’-ation’.

One thing that they used for not allowing things/particles to sediment was called a shaker. It would be great if i could get one for myself that will take the work out of etching. When i returned i made an over-killed 3D model of the agitator that i had in mind. It would just be a 1-axis CNC with a stepper motor and belt, That was doing a lot for the task..

Here are some pics of the model: 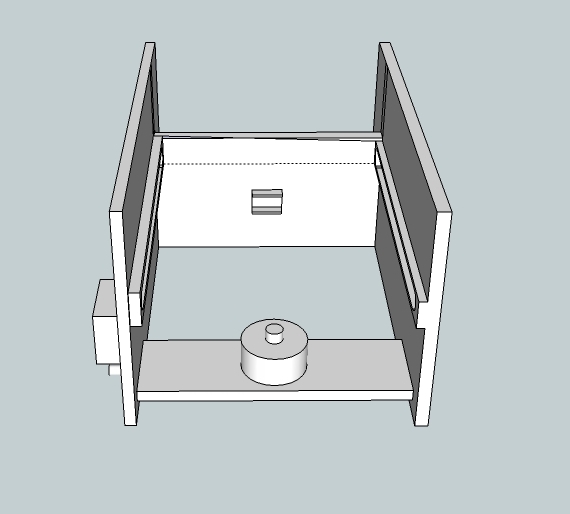 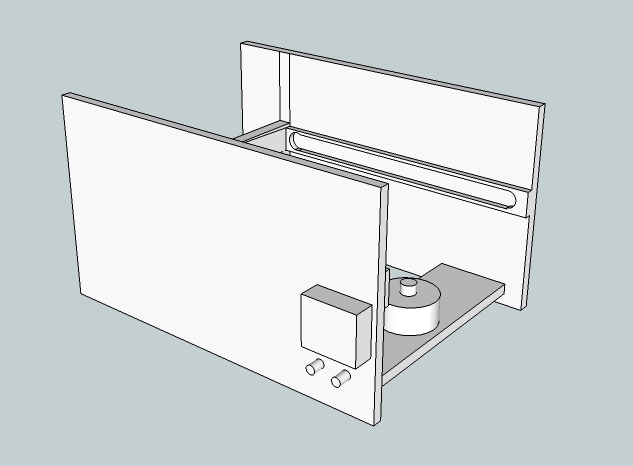 Realizing the overkill design, I went on to an easier one earlier this month ( actually previous month ) when a relative who was ‘demolishing’ his old PC gave me some old CDROMs that didn`t work. The mechanics did work though..

So, I just ‘damaged’ the tracks around the main feed motor and attached my own custom circuit based around the MSP430 micro-controller and majority of TI parts as they can be shipped to anyone  with an address making it very easy to re build yourself.

Here is a proof-of-concept video i posted a while back where the Etchinator ( now Open Agitator after i realized it could do a lot more like cooling hot milk  😀 ) was etching its own control board  :

I used a L293D H bridge motor controller to control the forward and backward movement of the cradle with an adjustable speed by giving a PWM on the Enable Pin . People who had made LFR`s in the first/second year know its a child`s play.

1. Latch on to that part and stay stuck.
2. The whole system would move a bit forward each time and latch on the wrong part.

So, an end-stop detection was required which would keep the cradle in the fixed portion.. some what similar to the ones i had seen in the CNC`s which tell them their legitimate playing fields.

The answer was using the old mouse push button that came with the CD-ROM. Its softer and probably made to withstand greater number of press-cycles than a standard SPST Tactile switch.

So , now the logic would work like, whenever the button/EndStop is pressed, the direction will be reversed for a fixed time and then reversed again.. So, the cycle keeps on going.. .. .. ..

Here is the final  schematic i came up with: 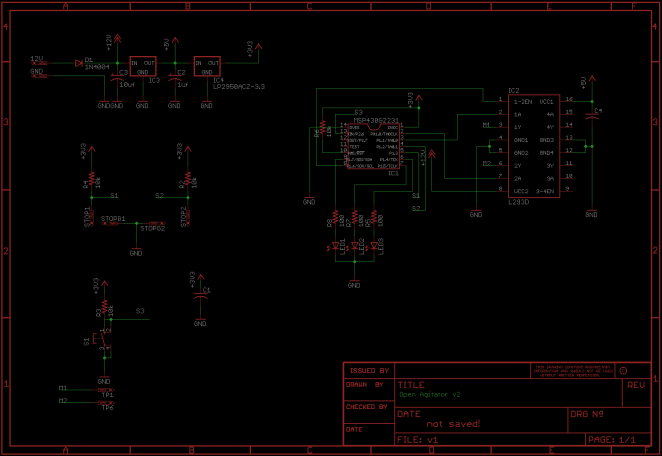 Since, i did`nt wanted to leave any pins un-used i included 3 LED`s which show the different states of the agitator.

The power supply needs special mention as it converts from a standard 12V DC adapter to 5V for the logic of the bridge (L293D) and again an LDO LP2950-3.3V for the MSP430. The LDO can be sampled from TI and 7805 is available locally with every tinkerer.

Even the driver i.e L293D can be sourced from Ti. The brain of the device is a MSP430G2231 also sampled from TI and programmed from the MSP430 Launchpad. So, This project was indirectly sponsored by TI 😀

The next came the board layout.. I designed it to have the least number of  vias (They can be a pain sometimes) while fitting at the back of the CD-ROM. Here is the one with just two vias.

Since, the position of motor/EndStop switches were flexible they eased out the routing a bit. You can also add a DC Jack to it if you like. The files are available on github here.

Here are pictures of the final build i managed to pull off. 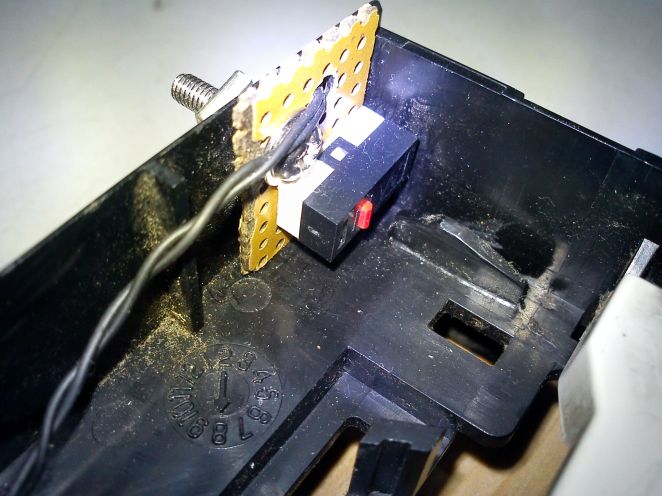 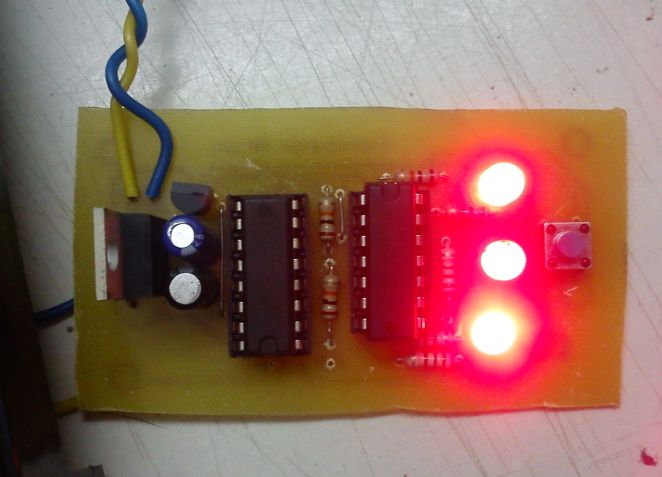 Fixed to the back of the CDROM

The next thing that was left was to give it a sturdy base. I choose two planks of wood that were lying around. It was essential to leave it without any base on the middle section as if ‘ever’ there is a chemical spill that can be cleaned without unscrewing the entire assembly!

So, Here is the final build :

You can fork the complete code and design from my git.

Here is a video of me explaining the build.. Please ignore the following :

Hope you like it and build one for yourself..
Cheers,
IndianTinker

Edit: Please vote for this project on instructables here !

See another make of my project by a reader on instructable:

(Thanks for sharing Aleš )