I have moved to pune for work now and exploring the city has always been on my top agenda.  Pune has always been a happening city of makers. Mumbai is close-by and easily commutable. There are a lot of DIY/Maker start-ups here too and who doesnt know about IOTPune/DooThings. [A more detailed city review sometime later]

Bored one night,thinking how to spend the weekend more constructively, i started to scroll through the meetups around my place on weekend. The main priority was “Distance” . People living in Pune can relate. The city transportation is awful and a thread is always running in mind querying, “Dude! Will be able to walk back? ”

Thankfully, I noticed Mozilla is organizing a big event near my place and there is no better way to spend the weekend. After visiting, MakerFest last year, I have really started to like these events.Anool(Sir) from MakersAsylum/Wyolum was coming with his team and so was IOTPune and so was Mark Surman from Mozilla and so were many others.

I stared to plan how to go at Symbiosis Centre for Computer Research, Here Transit comes to the rescue and i boarded the bus and got down at a nearby bus stop. Initial (rather first day) experience has taught me that we should have “Say No to Autos” banner erected everywhere in the city. This is more important than Polybag Awareness etc. if thought in a more citizen centric way. [Weekly, Auto Rant Ends.Stay tuned for more]. I walked another 800m and there i was at the venue.

I entered the gate of the college. I was asked my credentials to check, if i registered. I had , so i went to see the workshops as they were listed on the website. I carried my OpenBadge [A no brains LED Matrix badge that i made for MakerFest but could’nt debug it completely] and some other projects too just in case someone like-minded crossed. Swag! 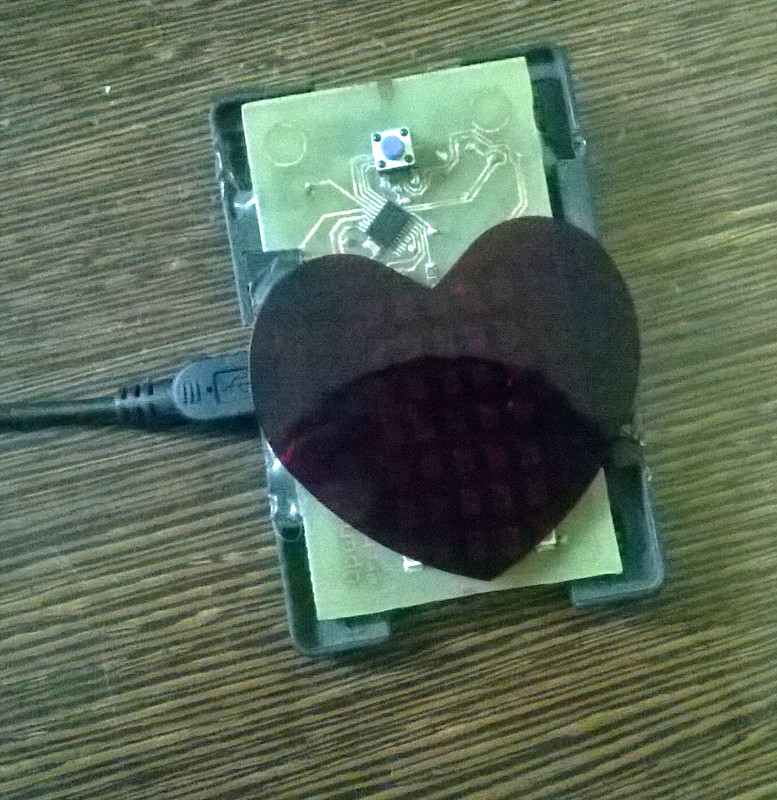 I went straight to the main hall and found it jam packed. So, i gave it a pass and went on visiting the booths. There were pretty interesting things showcased. Let start the Booth WATCH:

Makers Asylum was present with all guns blazing. 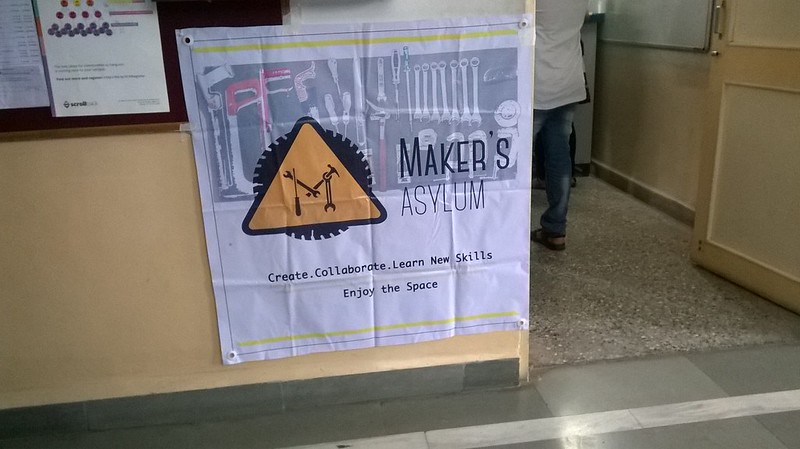 The Word Clock was at display. 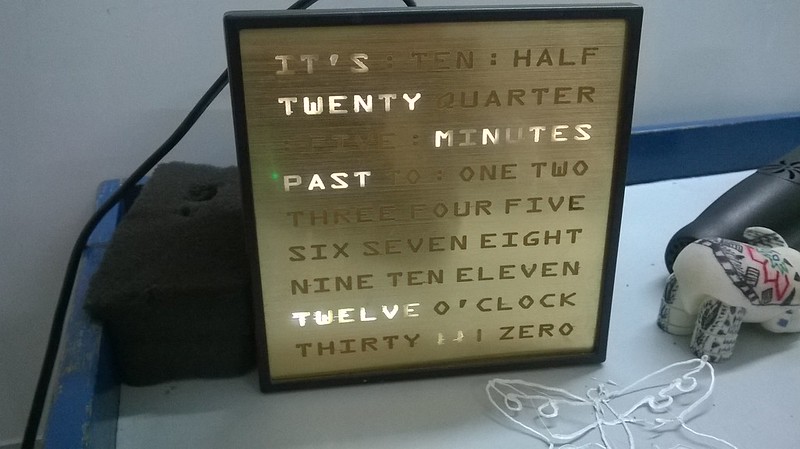 Samarth from Melting Mints who works with the Makers Asylum showed some mind blowing applications of 3D Printing. This is a human skull printed from a scan. 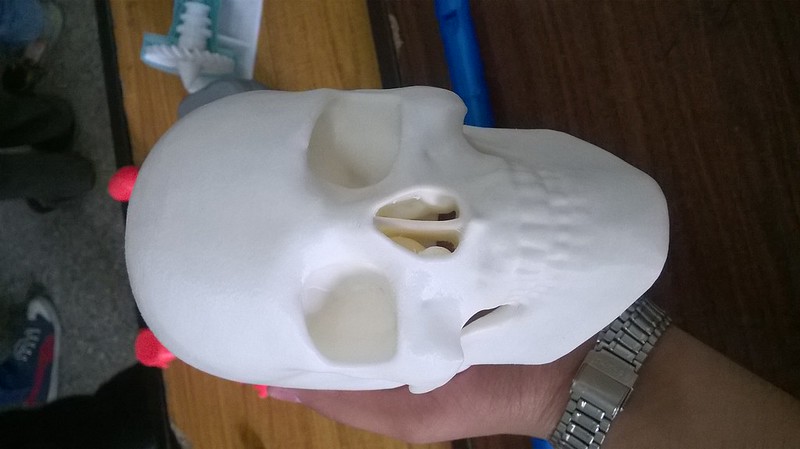 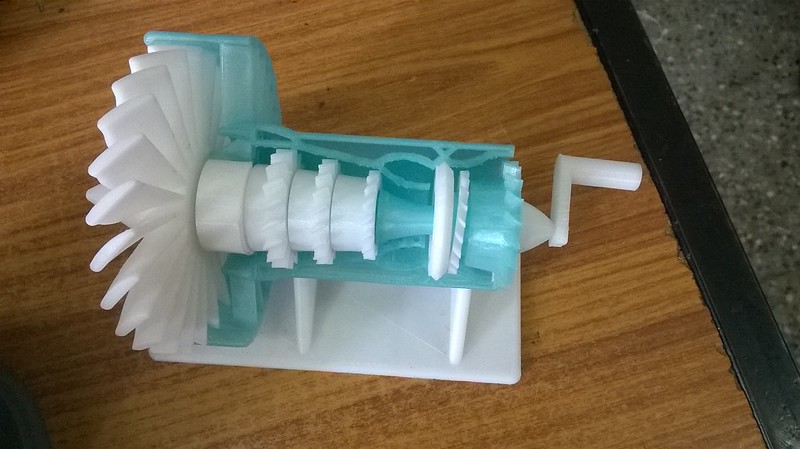 A 3D printed Music Instrument and a Car that is so awesomely finished. 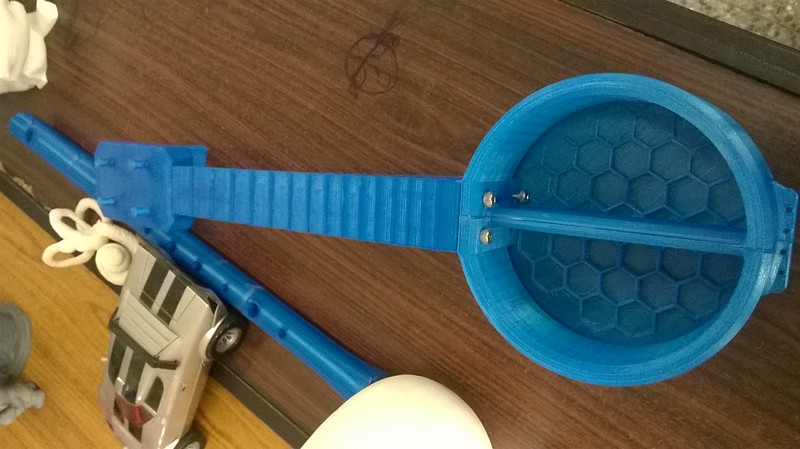 When asked if he can print custom parts and more specifically 3D Printer parts. He said, Why not? Plus he does it economically too for students willing to start printing. 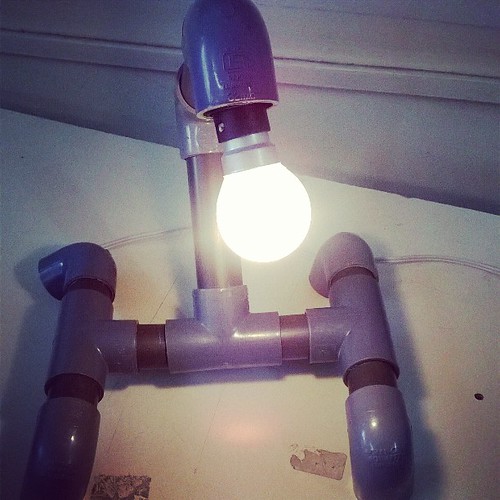 They also had a few 3D pens for visitors to play with. 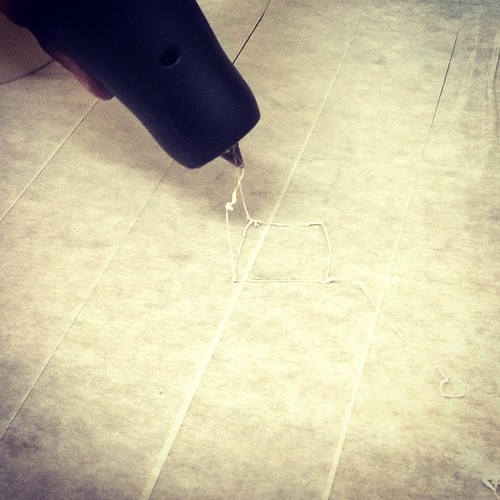 I managed to build this cube. Tch! 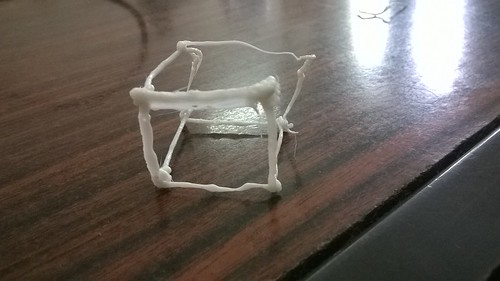 In the next booth, An interesting thing was up for display. A Smartphone and a DSLR ? Connect the dots and you get the triggertrap.
It translates the audio out from a SmartPhone into DSLR jack signals to do interesting stuff. Intervalometers, Event activated clicks.. You say it and app does it all. 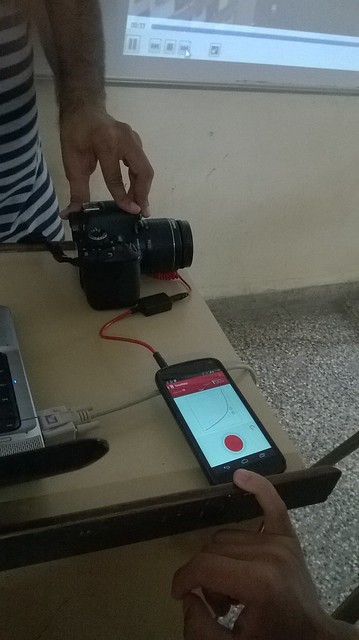 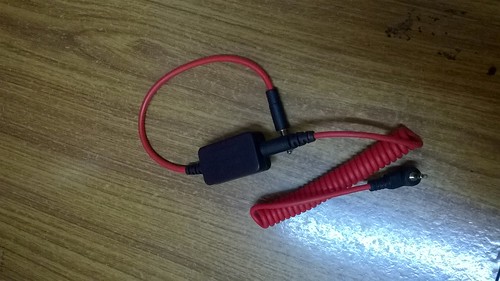 I even saw a PrintrBot METAL at Maker Party by Reed Robotics. It was smoooooth. 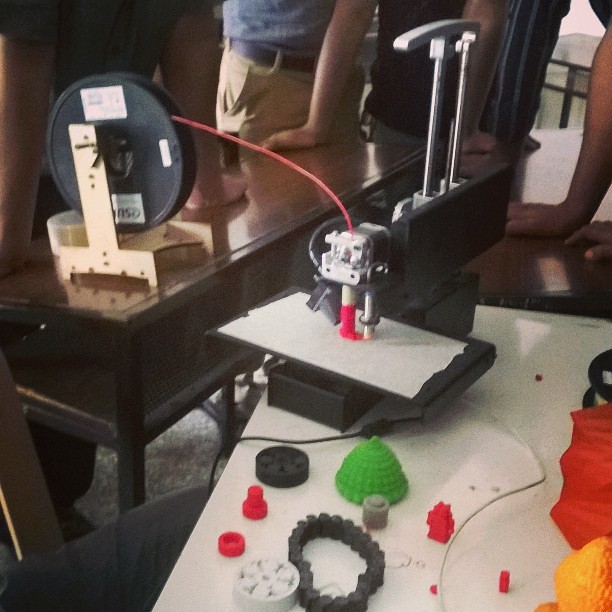 Ant Farm Robotics showcased their tiny WSN nodes that last for months on 2 AAs. The tiny ATTinY Runs a full blown RTOS and uses a TI Radio (RF2500/CC1100) to do the wireless part. 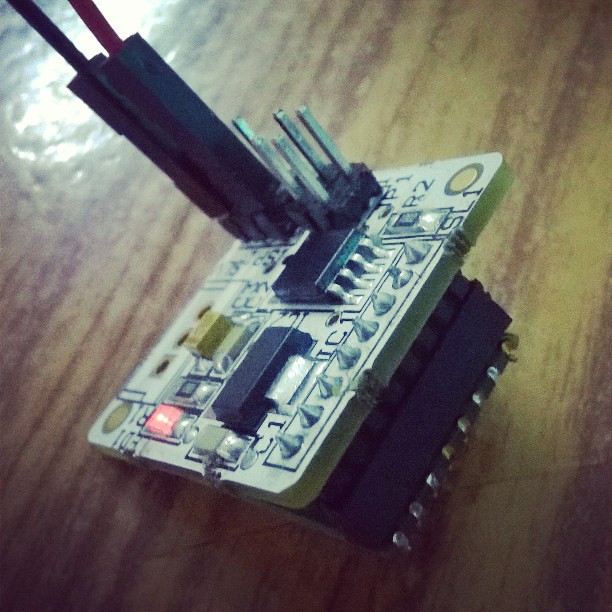 Navstick were showcasing their next generation Autonomous navigation systems that can be used in Quads, RC Planes and IGVs etc.

A Quad with Navstick installed. 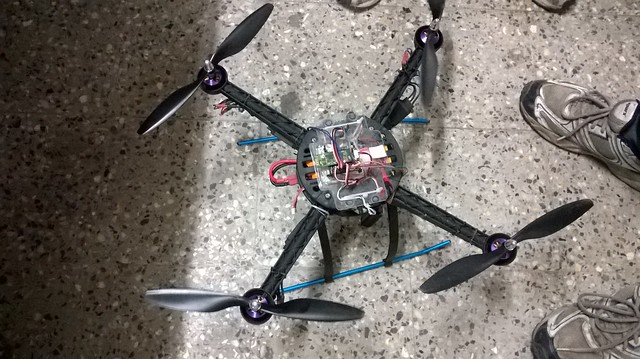 A RTF Bixler that too supports NavStick 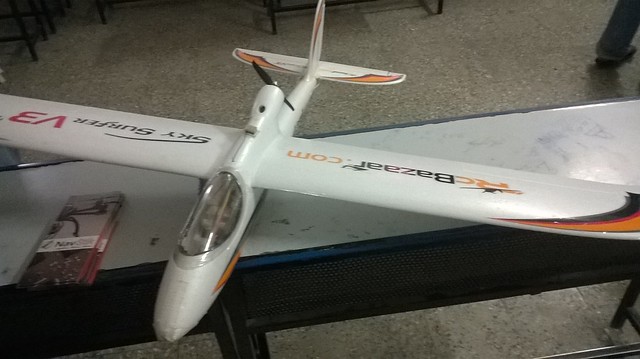 They use a GoPro for Aerial Photography. Kewl! 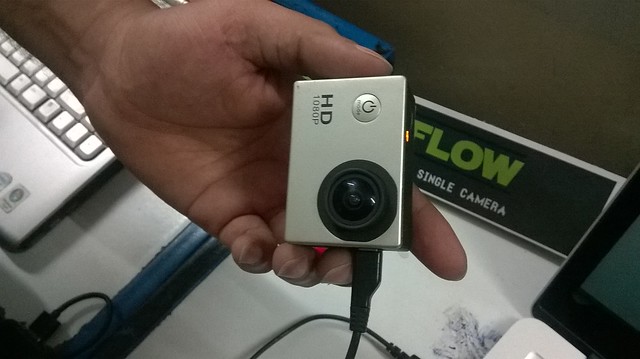 A part of Navstick Hardware Family. Built in India 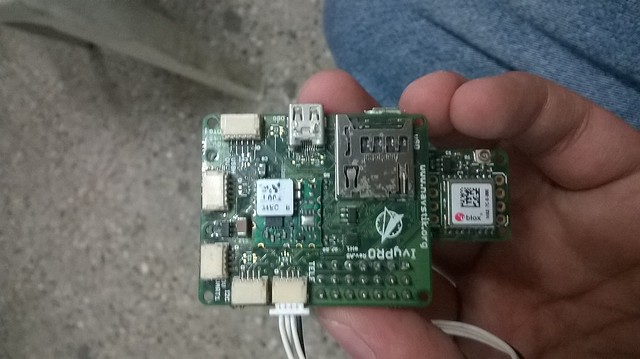 On the way to the second floor, I met Nishant Modak of IOT Pune.He too is(was) suffering from HP Laptop Syndrome and we talked a bit about his Makerspace in Pune called DoThings. He is doing a Pan America trip visiting MakerFaires with his team. 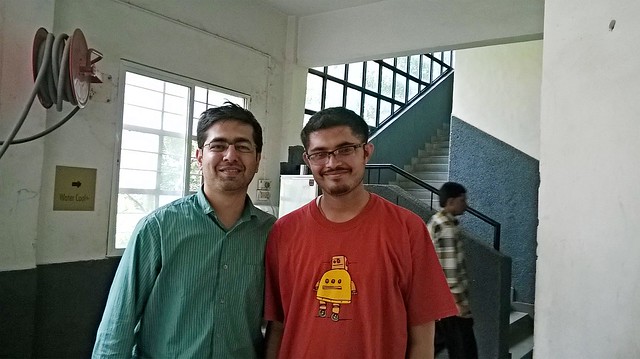 They have developed an awesome BLE Arduino Board that does great things. Its called Tah! They also have a campaign running on crowd supply. Get yours now! 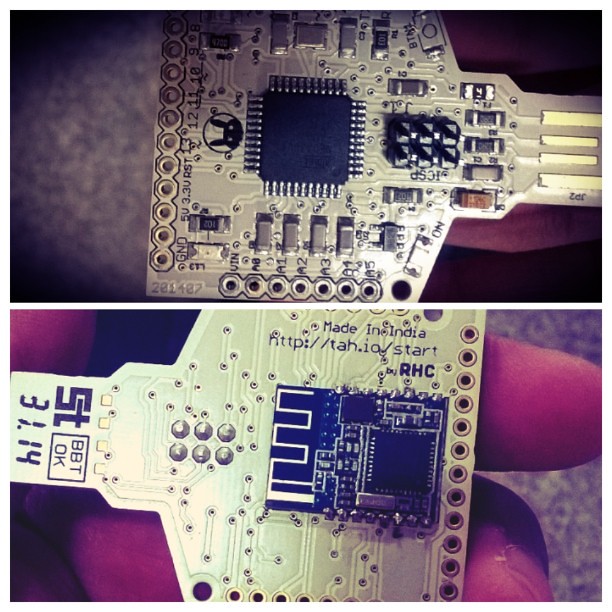 He accompanied me to their booth where Anuj was giving a talk about Tah! 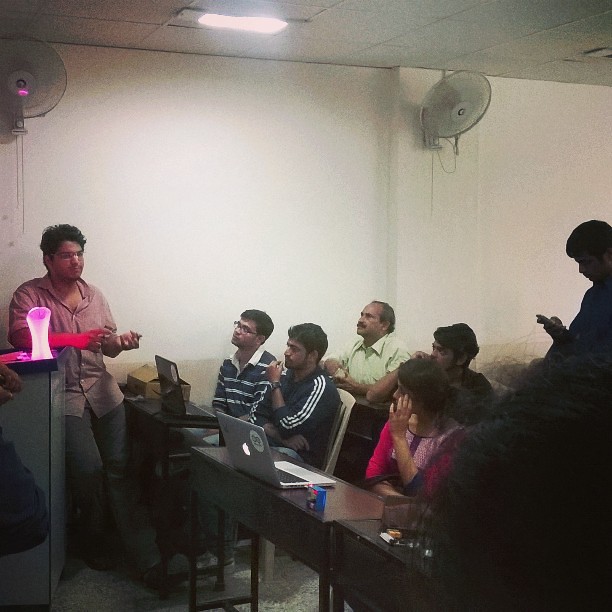 They do great things at their MakerSpace which is verrrrry far from my place(Remember the thread). I saw an Intel Galileo which they had brought. 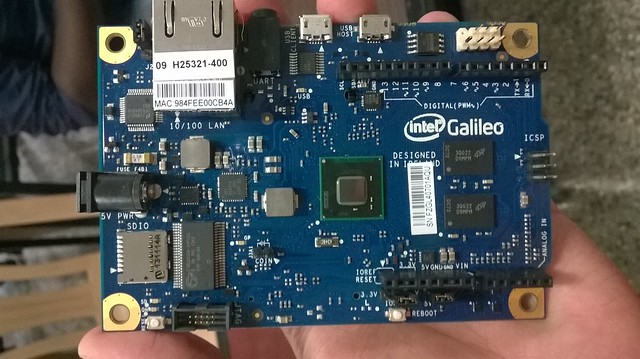 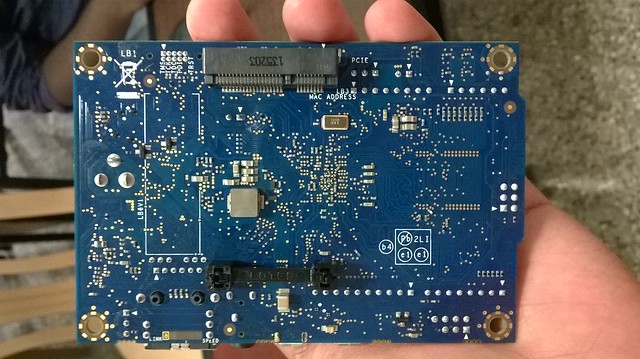 It was time to go. As i traveled back, I thought of various things like Autowalas, 3D Printing , Makerfaires and of course Food.